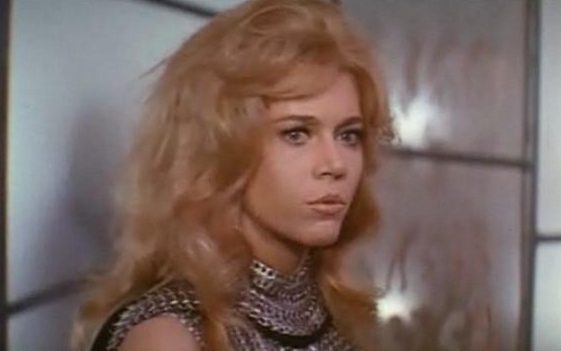 So I made the mistake (?) of watching Barbarella. I didn’t intend to, it just popped up on TV, and I ended up sitting through the entire hour and 38 minutes of this trainwreck.

From the very first scene, I could tell that I was in for a wild ride. There are so many words to describe Barbarella that I can’t choose one except just bizarre. So bizarre that I couldn’t stop myself from watching till the end. After the first I don’t know hour and fifteen minutes, I thought that this movie could not be redeemed. Surprisingly, in the last 20 or so minutes, there was suddenly a plot; and as much as I hate to say it, it had potential.

Barbarella is a 1968 science fiction film starring Jane Fonda as Barbarella, and it’s pretty bad. Since I don’t expect you to actually watch it, I’m going to tell you the whole plot instead.

The movie starts with Barbarella undressing in her pink fur-covered spaceship, and I think that really sets up what this movie is going to be about. Then Barbarella receives a “FaceTime” from Mr. President of the Republic of Earth, and she answers it, WHILE NAKED. (There is a lot of unnecessary nudity in this movie by the way, to make up for the story.) I wasn’t really paying attention to what Mr. President of the Republic of Earth was saying, but Barbarella is chosen, for some reason, to go find a scientist or something called Durand Durand, for some reason. Barbarella gets dressed and then later changes her outfit again before she lands on some planet where some weird twin children throw a rock at her and then casually kidnap her, taking her to a cave. They tie her up and then a ton of terrifying killer dolls slowly attack her and chomp at her with their sharp metal teeth. Barbarella is pretty chill about this for some reason. Then Barbarella is saved by a really hairy man which she is very thankful to. She asks him, “how can I repay you?” He wants to make love, so Barbarella pulls out a pill (because apparently, that’s how people do it in the future). However, the hairy guy does not want the pill, and Barbarella reluctantly agrees to “do it the old-fashioned way”, only to really enjoy it. The man drops her off at her ship and fixes it for her because it was broken. She changes outfits again, and then AGAIN when she gets on her ship.

She’s flying for about two seconds when her “fixed” ship crashes in some horrible labyrinth where the people are oppressed by the Great Tyrant. There, she is found by Pygar, a winged blind angel for some reason. Pygar takes her to Professor Ping who can help her fix her ship and get to the city above the maze, Sogo, where Durand Durand (who I forgot about) is. However, it will take time to fix the ship, and that’s what Barbarella doesn’t have, so she asks Pygar to fly her to the city. He claims he can’t because he “has lost the will to fly”, but that changes and Pygar flies Barbarella to Sogo. They’re attacked by some of the Great Tyrant’s guards but make it safely to Sogo only for Pygar to be taken and Barbarella to be cornered by a few men. She is saved by a woman who stabs the men and then demands to “play” with Barbarella and repeatedly calls her “pretty-pretty” (which Barbarella rejects).

Barbarella wakes the Great Tyrant and tells her that Durand Durand has tricked them, and now they are locked inside. The Great Tyrant tells Barbarella that there is no way out without a key. Meanwhile, in Sogo, the Resistance is in full swing, and Durand Durand, with his death ray (?), has decided to take over Earth as well. The Great Tyrant realizes there is nothing they can do to stop this and decides to release the Mathmos, an evil, destructive liquid that surrounds all of Sogo and was established earlier but I forgot to mention. Everything is destroyed, but Barbarella’s “goodness” creates a protective bubble around her and the Great Tyrant that saves them from death. As they are floating up, they see that Pygar has also been saved from the Mathmos. Their bubbles burst, and Pygar carries the Great Tyrant and Barbarella and the three fly away into the horizon to Barbarella’s ship.

Congratulations, you’ve made it! Now that you know what exactly Barbarella is, it’s time to fix this movie. As you can probably see, there’s a lot to digest here, both good but mostly bad. Put simply, this movie is a mess. Despite that, I still see some potential. However, it’s going to take some work to fulfill that potential.

Firstly, we need to cut the beginning and start the movie at Barbarella’s crash in the labyrinth. In this version, Barbarella is not assigned to a mission by Mr. President of the Republic of Earth because Barbarella does nothing to prove that she’s qualified for that job. Now, she’s simply searching for her friend or family member Durand (we don’t need the second Durand in the name). Pygar can stay an angel, but now the movie can tap into his emotional trauma and elaborate on why he’s lost the will to fly.

Barbarella can also spend more time in the labyrinth where she can connect with the people, understand the suffering, and grow angry at the injustice and oppressive rule of the Great Tyrant and surrounding Mathmos. The people becoming part of the maze now works as a metaphor for the unhappiness and loss of identity and direction under cruel governments. This change would also create a more nuanced character in Pygar and most importantly, Barbarella. She doesn’t have to be physically strong in order to be powerful, but can instead have a strong sense of empathy and justice, representing the power of action, hope, and community. In the original, Barbarella is just a pretty face without redeeming qualities or any sense of direction. Now, she can be the one organizing the Resistance and her character can serve as a uniting factor in a dull and miserable world. This is what can revive Pygar’s will to fly.

Once Barbarella gets to Sogo, she can see a mirrored version of suffering as in the labyrinth except it is caused by the harm of lavish excessiveness and gluttony. Barbarella’s character can grow as she learns that no one can be happy when surrounded by evil. Since Pygar stands out so much as an angel in such a horrible place, he is captured and the Great Tyrant attempts to strip him of his individuality (to no avail). While Barbarella searches for Pygar, she is also captured and encounters the Great Tyrant. Then, she is saved by her Resistance movement, given the key to the Great Tyrant’s chamber, and expected to kill her. She can still be captured by Durand, but instead of a pleasure machine, Barbarella can be tortured in the same way as Pygar. Barbarella still ends up trapped with the Great Tyrant, but this time, she gains an understanding of the Great Tyrant’s motives and realizes that evil isn’t just black and white. The Mathmos is still released and the bubbles still form, this time with a justified reason for Barbarella’s absolution. Some of the people in the Resistance are saved as well, and the Great Tyrant gives up her title, dedicates herself to reform, and stays behind to help rebuild Sogo from its ashes.

Oh and also, in this version, Barbarella KEEPS HER CLOTHES ON. There were about 10 different outfit changes in the original Barbarella, and it was so excessive and unnecessary.