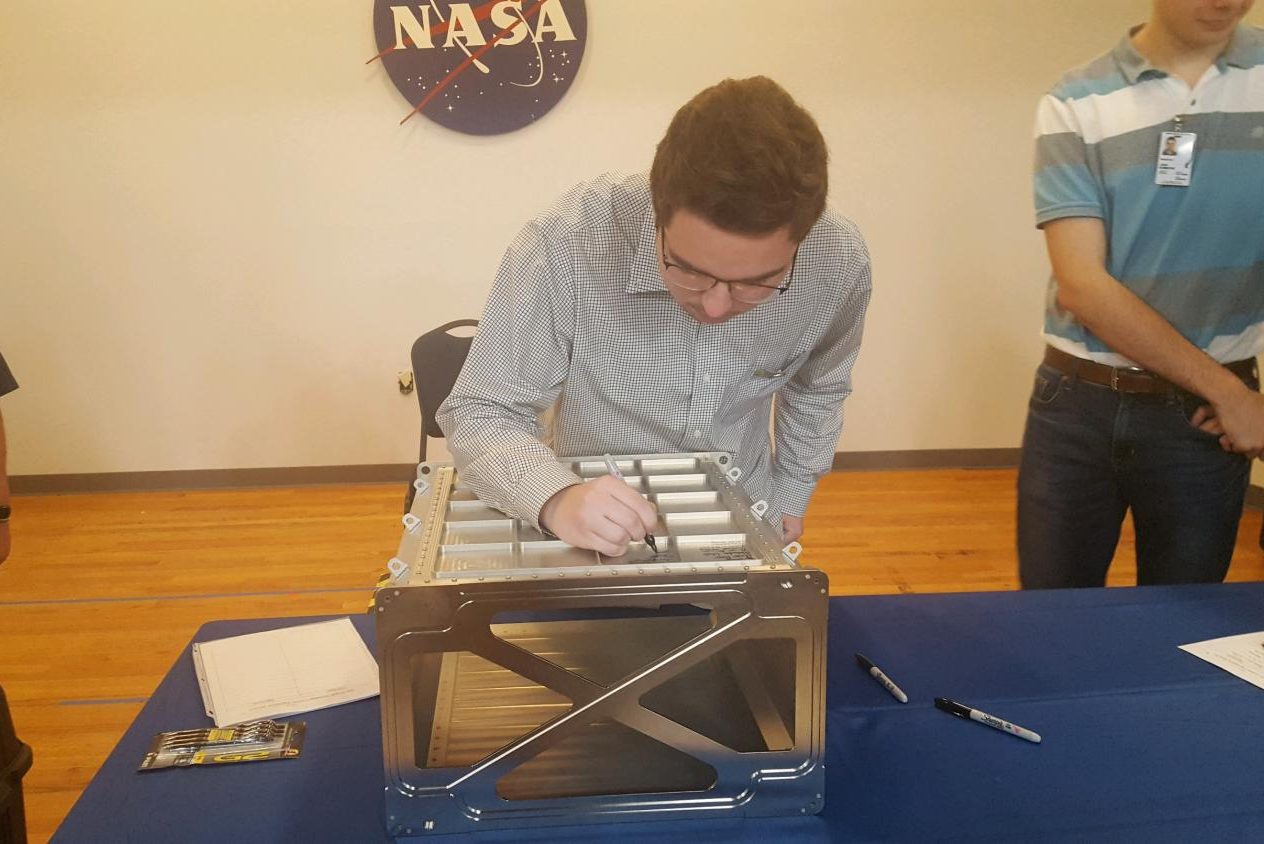 James Keiser signing a locker made by HUNCH students.

Person of the Week: James Keiser

After a full school year of working on their projects, the students involved in High Schools United with NASA to Create Hardware program, commonly known as HUNCH, have visited the Johnson Space Center to receive their final review of their products.

Senior James Keiser started in the engineering class his freshman year and later started participating in the HUNCH program.

“During my second year in Mr. Bennett’s class, he knew my skills with our computer-aided design software and would give me small tasks to do that the older students didn’t have time for,” Keiser said. “Eventually, the tasks got bigger and I was a member of the HUNCH program and continued it to the next year.”

Culinary, fashion design and other various classes have all participated in some aspect of the HUNCH program, but the manufacturing and creation of the products presented at the space center were created by students in the engineering manufacturing class, including Keiser.

“The engineering manufacturing classes and drafting classes are highly involved in HUNCH,” Keiser said. “Manufacturing focuses on making metal parts for NASA to use in training areas and on the ISS. The drafting class focuses on tackling issues given to us by NASA and we are also given design challenges such as everything that led up to the astronaut review. We also make models they ask us to and we 3D print them and those are used at astronaut training facilities and on the ISS.”

The HUNCH program utilizes high school students to create various items needed for NASA projects to go into space, and the students meet with their NASA advisor regularly to get feedback on their items and fix what is needed.

“Robert Bryan and I were in the other projects category, we started with a design for a hygiene caddy but after realizing it was adaptable to the entire ISS we pushed that agenda to make handrail clips that made it easier for astronauts to hold practically anything on the station,” Keiser said. “The astronauts would use our different clips to mainly suspend towels and other linens in microgravity, hold their iPads in place, and hold small tools. Of course if one of our clips doesn’t work for a specific purpose we will adapt the clip or make a new one for the astronauts to use.”

At the final review, Keiser and his partner were critiqued by astronauts and engineers.

“My classmates and I were selected to go to the final review. We displayed our projects along with the research and testing behind it for NASA engineers and astronauts to critique and give feedback,” Keiser said. “Robert and I only received positive feedback and our NASA director told us he wants us to push it forward to possibly fly on the ISS.”