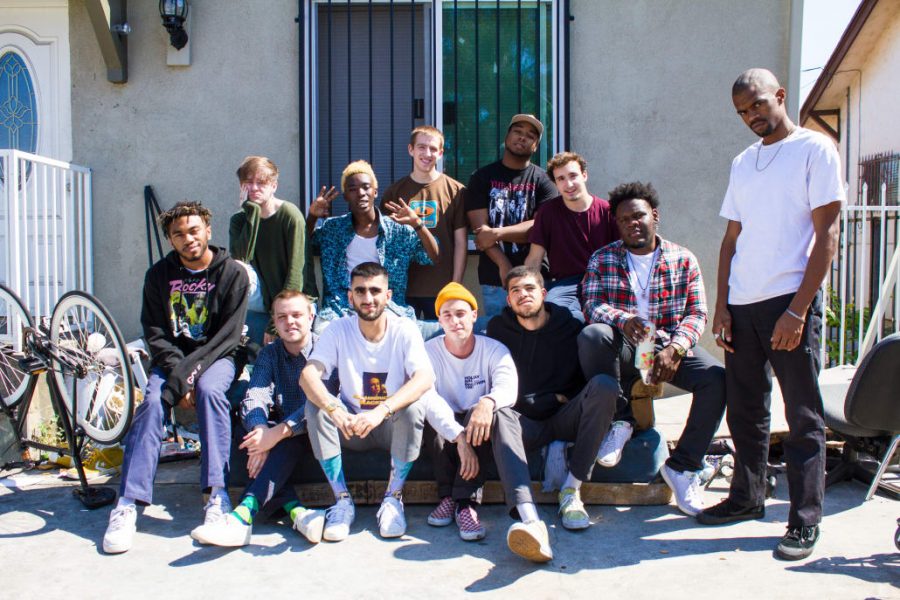 Brockhampton and the Redefinition of Boy Bands

A new face for the All-American Boy Band

It used to be that boy bands were so structured, that it was hard for any of them to be different from each other. Each group made almost the same corny pop love songs, had one “punk” member for the teenage goths to relate to, and each member had their own “distinctive style” for merchandise purposes. Now, it’s 2017, and the face of the All-American Boy Band is a queer, diverse rap group called Brockhampton.

Brockhampton members met on an online Kanye West forum before coming together in San Marcos, Texas then moving to Los Angeles to kickstart their careers. Brockhampton has totally changed what it means to be a boy band as they transformed the intense structure to a culture that embodies individualism to the extreme. The group is made up of various artists and producers including Kevin Abstract, Dom McLennon and Merlyn Wood, all who seem to carry an outsider persona, which is now dominating the group’s aura and the interpretation of boy bands themselves. Brockhampton is constantly compared to Odd Future, a rap group consisting of Tyler the Creator, Hodgy and many more. The reason why Brockhampton is considered a boy band instead of Odd Future is mostly because Brockhampton focuses almost all of their time producing their cohesive tracks, while Odd Future members mostly worked on their individual projects and then would come together to produce the Odd Future tapes. Releasing their albums Saturation and Saturation II within the span of a few months shows the band’s dedication to producing group projects.

If you would’ve asked me a few years ago to describe a typical boy band, I would’ve probably said something about a few straight white guys that got lucky on a talent show, but now, my perspective has been totally warped. Rap groups have been around since the genre emerged, and Brockhampton identifying as a boy band shows that genre blending is more important now than it has ever been (read any of my other music articles to know what I’m talking about). The group, or should I say, band, combines rap with aspects of rock, jazz, pop and literally everything. Their blending has given them such a wide demographic for their fan base, which is why they probably choose to title themselves as a boy band rather than a rap group, a way less confining title for a group that embraces freedom.

Brockhampton is almost entirely self-ran, with 14 current members that design their own merchandise, produce and write their own music, and manage themselves. Their independence also contradicts the standard boy band, who is usually micromanaged by their parents or an old British white guy. There are so many reasons as to why this new definition of a boy band is better than ever, so I made an easy list:

1. Brockhampton’s songs aren’t just about having a crush on a girl (sorry, One Direction fans).

2. Everything they create is purposeful, and well thought out (watch Viceland’s All American Boy Band, or any of their music videos).

3. They’ve created this culture of being carefree and independent. Brockhampton has inspired a whole generation of teenagers to be more unapologetic about themselves, whether that alludes to their sexuality, personality or mental states, thus making the new era of boy bands more influential and promising than ever.