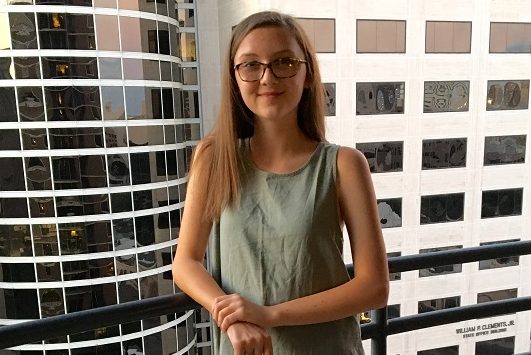 Person Of The Week: Grace Taylor

The student with a famous ancestor

We all wonder who our relatives are, whether they were interesting or if they did anything momentous. Some of us don’t know our ancestors at all. Freshman Grace Taylor made a surprising discovery last year while completing a US history family project. One of her ancestors is none other than famous pirate and privateer Jean Lafitte.

“It was US history, and it was the family heritage project. We were supposed to trace it back as far as far as possible and we had to interview three family members and ask them a set of questions.” Taylor said. “I had an aunt that made a book, really thick, about our family members on my dad’s side dating back to the 1400’s.”

According to Wikipedia, Lafitte is most well known for helping General Andrew Jackson defend New Orleans against the British in the War of 1812. He was previously a part of a smuggling business in Louisiana, becoming a privateer in exchange for the legal pardon of his comrades. “We didn’t know my mother had Spanish heritage, and when we traced it back to him it was crazy.” Taylor said. “I didn’t really think I had anybody cool in my family. Not in a rude way, just nobody interesting. It was neat to know I was related to this big historical figure I learned about in class.”

Despite Lafitte being a smuggler and pirate in his early years and even close to his death, there was still room for positive thought. “I know I should see him as a bad guy, but he’s really cool. If he was here now and stealing, I wouldn’t think it was fine. But back then, it seems really cool.” Taylor said. “I wouldn’t say I respect him, but I think that he’s super interesting.”

Although it may be quite obvious that Grace doesn’t wish to follow in Lafitte’s footsteps, she has expressed that she wants to be as important. “For a

“For awhile I was wondering if I should go into the army, but now I think I want to go a science route or in pharmaceuticals. I don’t want to be like Lafitte, but I want to be as cool as my ancestor.”