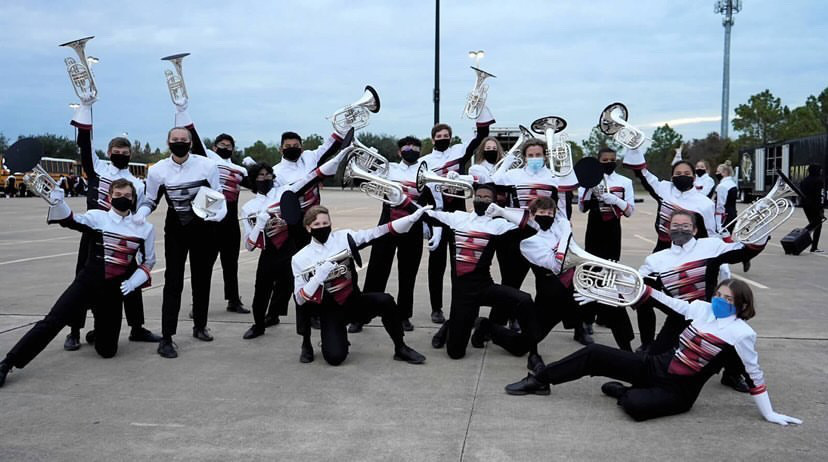 Members of the french horn section pose together following the confirmation of their eligibility at state. (Photo By: Benjamin Belcher)

Members of the french horn section pose together following the confirmation of their eligibility at state.

The effects of the COVID-19 pandemic have made themselves very apparent for the Cy Woods High School band. With social distancing being required for performances, and thus performances needing to be reworked and reimagined, this last year of activity for the band has not been easy. Despite all this, the band advanced to the state level for the first time in 10 years, following the marching contest on December 5, 2020, where they placed second.

“In [the area marching contest], they only took three schools to state,” junior and section leader Benjamin Belcher said. “We ended up making second place behind Bridgeland and Seven Lakes.”

In order for a school to advance to the state level, they must score high enough in UIL and area competitions to progress. This is a large undertaking and requires lots of effort on the part of band members.

“Very few bands in the state have enough raw talent and skill to make it to the state competition,” junior trumpeter Grayson Tamez said.

Following their advancement, the band placed tenth place as a state finalist out of 20 bands, a first in the school’s history.

“It’s the very first time any of us have gotten to experience marching in the Alamodome among some of the greatest bands in Texas,” senior and section leader Erik Penick said. “It represents just how far our directors have brought us.”

2020 was the second year the Cypress Woods band made it to state. Following their eligibility, the band continued to perfect their routine and practice their skills, a process apparently not stressful for the majority of members.

“Everyone seemed to put in more effort to improve in those last few weeks,” Penick said, “We went through a lot of work, but we knew we could do it because we were prepared and willing to do what it takes. There wasn’t a whole lot of hyping, because last time we did that, everyone got excited and didn’t perform at peak level. This time it was only business.”

For veteran and new-coming band members alike, the experience was one-of-a-kind. While their appearance at the competition was “unexpected”, members are confident that their main performance went right as planned.

“We were the unexpected showstopper,” Belcher said. “Tenth [place] is a massive deal. Our band got a ton of recognition and we are a big name now.”