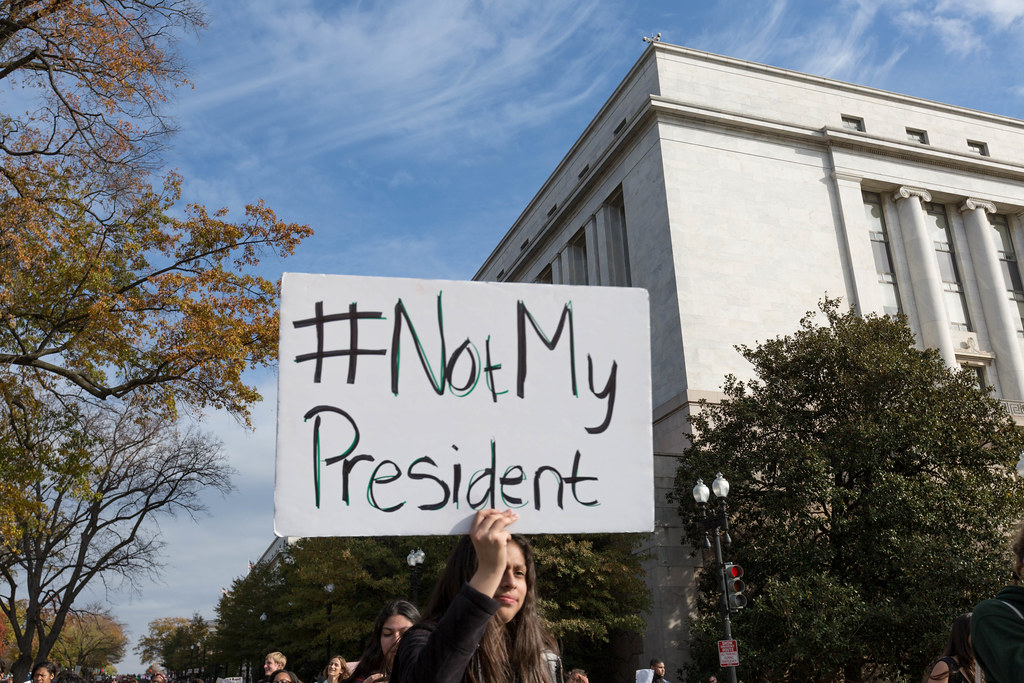 “DCPS Walkout, Independence Ave, Not My President” by Lorie Shaull is licensed under CC BY-SA 2.0

“DCPS Walkout, Independence Ave, Not My President” by Lorie Shaull is licensed under CC BY-SA 2.0

Why the 2020 election feels existential

Civil unrest has become a real possibility following the 2020 election, no matter who wins. However, the possibility of such an outcome is not due to candidate rhetoric: it is an indication of the partisanship, loss of trust, and sensationalization of media that has overrun the country in recent years.

The only way to mend the social fabric of the United States of America is to restore faith in American institutions and each other.

An unfortunate side effect of growing partisanship has been the deepening of animosity between conservatives and liberals. According to a Pew Research Center survey, “Partisan Antipathy: More Intense, More Personal”, a majority of Democrats and Republicans do not believe the other party shares their nonpolitical goals. The natural result of hyper-partisanship is a feeling of severe discontentment. Extreme groups on both sides of the aisle use this sentiment to hijack the dissatisfaction surrounding the results of the election to manufacture violence. Despite condemnation of the brutality by leaders of the party, the existentialism people feel when they are losing is hard to stifle. They believe so strongly their side is “correct” that they would condone violence to reach their political goals.

One of the primary reasons that Americans may resort to violence is because of a loss of trust between American constituents. According to another Pew Research Center survey, “Trust and Distrust in America”, 79% of U.S adults believe Americans have “far too little” or “too little” confidence in each other. This lack of trust often leads to a feeling of existentialism as citizens believe the opposing side is purposefully trying to undermine American democracy. Additionally, enough skepticism can reduce the number of compromises politicians are willing to make. In fact, the same survey cites 70% of U.S adults believe American’s low trust in each other makes it harder to solve the country’s problems. Undoubtedly, this combination of factors leads to violent reactions when one side does not achieve the desired outcome because they view the other side as a threat to American institutions.

The onset of the loss of trust and hyper-partisanship prevalent in American society can be partially attributed to the sensationalization of media in recent years. In a 2018 research paper that analyzed the diffusion of content on social media, results suggested that “moral and emotional content may be used strategically to draw online engagement and aid political campaigns.” Much of the content on social media exploits emotional appeals, which are harder to disprove with facts and statistics. This paradigm shift in news consumption relies heavily on sensationalized headlines to garner more likes and upvotes. Many people only receive their news through outlets that they align with ideologically. This leads to the creation of echo-chambers, which fosters further partisan values and a loss of trust between Americans.

The rot that partisanship and irresponsible media coverage has brought about has resulted in a feeling of existentialism. If Americans do not try and mitigate these issues it is only a matter of time before civil unrest erupts.