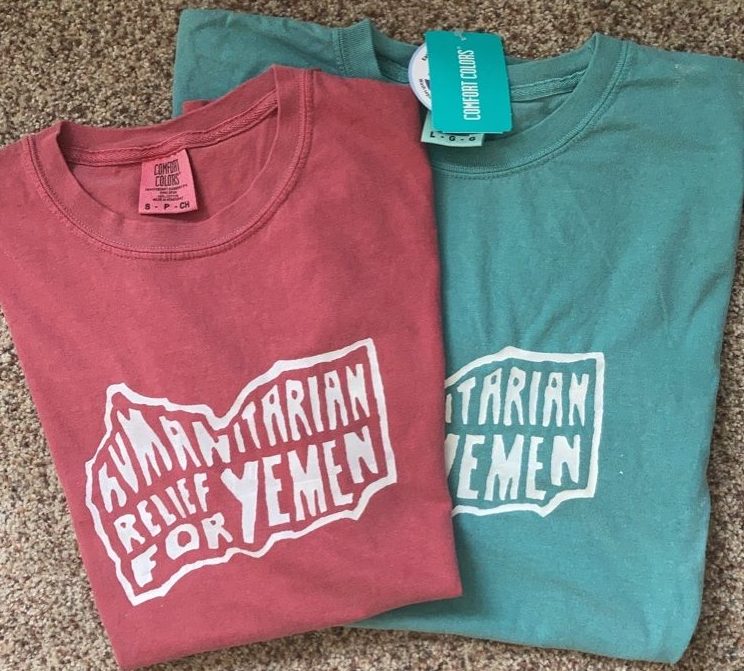 While students lamented over the pandemic ruining their summer plans, Cy-Woods Junior Meghan Lee decided to start an initiative to help fundraise for the ongoing Yemen humanitarian crisis, and has since raised $100.

According to BBC, the crisis started when the Arab Spring uprising forced former Yemeni president Ali Abdullah Saleh to give power to his deputy, Abdrabbuh Mansour Hadi. He faced many issues and a rebel group known as the Houthi’s took advantage of the government’s weakness. The rebels eventually took over the capital Sanaa, and Hadi fled. Tensions and a stalemate between the Houthi’s and the Yemeni government continue and have caused a humanitarian crisis.

With three years of experience with art in middle school, Lee decided that the best way she could contribute to supporting the crisis was to create custom-made shirts. The profit funds efforts in Yemen.

“I read a lot about how sometimes if you give them [money]  to large organizations they can’t do as much because they’re not on the ground in these countries,” said Lee.  “I really want us to be mindful of that.”

Lee primarily uses social media platforms like Snapchat and Instagram to help promote her fundraiser. She credits the Black Lives Matter movement for inspiring her to use her platform and raise awareness of the Yemen crisis.

“The Black Lives Matter movement sparked a shift in how we use social media,” Lee said.  “I think people on Instagram started really using their platforms to speak about different things, such as the genocide in China that’s going on right now and the crisis in Yemen.”

The lack of recognition, despite the longevity of the Yemen Civil War, which has lasted almost six years according to the BBC, is something that was bothersome for Lee and helped inspire her to start the initiative.

“In middle school, when we took world cultures, I remember learning about this same crisis,” Lee said.  “Then coming full circle to high school and still hearing about the crisis and seeing that it needed acknowledgment from the public, especially from our side of the world, inspired me.”

The shirts are completely custom-made by Lee. She puts the shirts under a silkscreen, essentially a stencil, and spreads shirt ink across the stencil to create the design. The entire process takes about 15 minutes.

Lee has always dreamed of designing shirts; however, the process is not simple.

“Silkscreens are much harder than just simple designs because it’s very hard to get the details right, especially with mine,” Lee said. “Mine is smaller, and the details can be kind of difficult: I think it took me about 10 coats of Mod Podge to get that really crisp line on my screen.”

Cameliss Rivera-Gautier, Lee’s basketball teammate and friend, believes that Lee’s initiative is indicative of her personality and activism.

“You can know about the problem, somebody can post it online and you can educate yourself,” said Rivera-Gautier. “She always takes the extra step like doing the shirts, not many people would do that … to raise a fundraiser and to get the money to help them.”