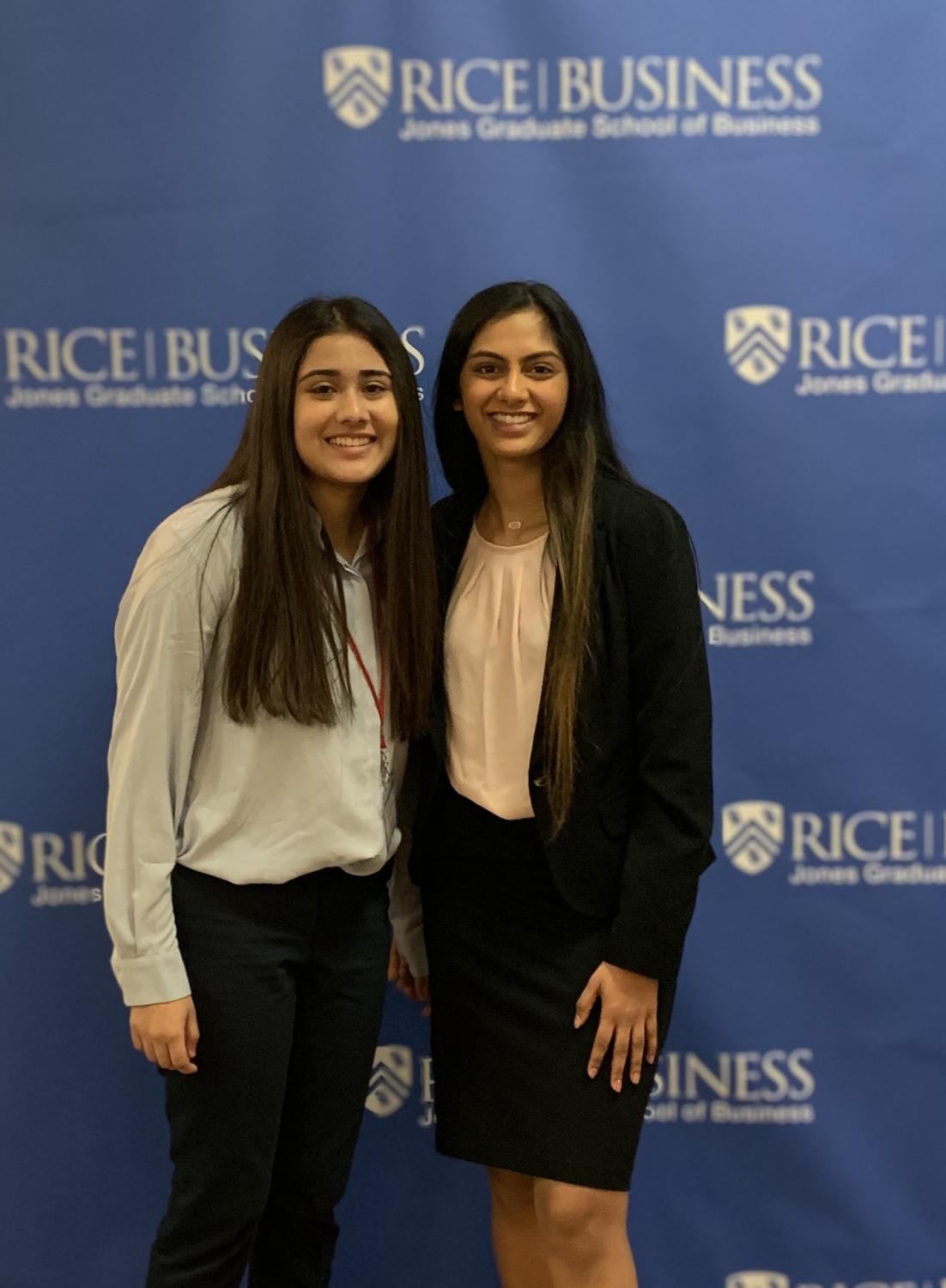 Manocha and Georgian at a Rice University Conference (Photo by: Andrea Balogh)

Manocha and Georgian at a Rice University Conference

Often the word nonprofit evokes an image of a multinational organization that is funded by international bodies; however, seniors Tanya Manocha and Rachel Georgian, are hoping to redefine the term.

Three years ago, Cy-Woods seniors Manocha and Georgian started the Young Enterprise Club in order to teach fellow Wildcats about various business skills like finance and marketing. However, as they looked for leadership opportunities in the Houston area, they realized that such opportunities were scarce. In order to fill the void, they started the Youth Executive Leadership Program (YELP).

“YELP is basically a nonprofit which aims to educate underrepresented students about vocational skills needed for the workplace,” Manocha said.

“If you want to advance and pursue something beyond just where you start out, then you need to have all those skills to be able to navigate through all these different types of organizations and cultures,” D’Angelo said. “You just have to be able to be comfortable putting yourself outside of your normal routine and comfort zone.”

Initially, their nonprofit focused on creating opportunities in the Houston area. Through events at the local library, they taught students leadership skills that are not taught in the traditional school environment. However, they have now expanded their nonprofit with 13 international members and numerous successful operations. Chief among them is a partnership with Houston Independent School District in which they focused on teaching younger students public speaking skills and building their confidence. However, the partnership was cut short owing to the pandemic.

Despite the setback, Manocha and Georgian have steered the organization to success through virtual means: with a focal point on education equity. They are currently working on a project called Inspire Magazine that hopes to bring together kids from all over the world to talk about their educational goals and foster cross-cultural communication.

However, their most impactful initiative has come in the form of a fundraiser in partnership with another organization, Commit2Change, that raises money for girls’ education according to their website.

“We set up this program where $250 would fund an entire girl’s year worth of education and [their] stay at a rescue center,” Georgian said. “We’ve just been crowdfunding and we are also selling stickers, as a way for people to donate.”

The seniors have also started the podcast “Girl on Fire”, which brings together female business leaders. In order to diversify the conversation, they have brought in leaders across the spectrum ranging from healthcare to fashion. More importantly, they hope to inspire young girls to pursue entrepreneurship.

“We wanted to target the teen-girl demographic with this podcast and help them get their ideas off the ground,” Georgian said. “Give them inspiration, ideas, tips and tricks.”

Despite the numerous successes, a lot of effort and energy has gone into making YELP what it is today. Initially, one of the most difficult aspects was streamlining the communication between international members.

“We didn’t communicate with our team members, and that was definitely the biggest obstacle,” said Manocha. “Although we aren’t perfect at communicating we have definitely improved the year or so that we’ve had YELP.”

For Macocha and Georgian, the biggest accomplishment is not a single event or conference, but rather a culmination of the impact they have had on the lives of others.

“I think it’s just seeing our impact on students,” Manocha said.  “We see a definite shift in students’ confidence and just their public speaking skills in general. I definitely think that from my perspective that would be the biggest accomplishment that we kind of had through YELP.

Manocha plans on pursuing a master’s in business management and a career in investment banking or consulting. Georgian hopes to start a for-profit organization in the future. While both are unsure where they want to go to college, they agree that YELP and their ongoing education fundraiser is their main priority.

“I would like to raise a lot more money for our girl’s education fundraiser,” Georgian said.  “Impact as many girls as we can there, and then get more people aware about education equity around the world.”