A Game for the Ages 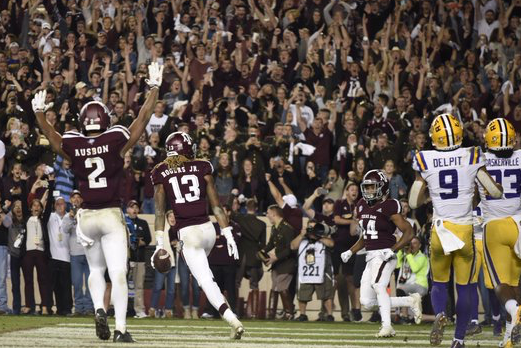 Jhamon Ausbon and Kendrick Rogers celebrate when the Aggies pulled off the victory.

Nov. 24- Kyle Field. Aggies. Tigers. 6:30 p.m. Game time. The Aggies of Texas A&M faced the seventh ranked Tigers of LSU. Going into the game, everyone knew that A&M had not beat LSU since 1995, so the stakes were high for this game. With the Aggies being predicted to lose, they went into game as underdogs and that’s when the Aggies play their best. It’s safe to say that the boys in maroon and white felt the pressure, because they pulled off a victory in one of the most historic games in college football.

Through all four quarters, both teams were neck and neck when it came to the score. While the game was tied most of the night, it was clear that Texas A&M had all of the momentum, and they were ready to take the game away.

Winning the game for either team ended up being much harder than anyone could have ever imagine. With just a few seconds left in the game, the Tigers thought they had won the game with snagging an interception, in fact they even drenched their head coach in Gatorade because they believed that had just won. However, the “interception” was turned over due to the fact that the A&M quarterbacks knee was down, therefore it was the Aggies ball and the interception was revoked. Then with only one second left, Kellen Mond, the Aggie QB, launched a 19 yard touchdown pass to WR, Kendrick Rogers, to tie the game up at 31-31 and send the game into overtime.

The fun had just begun. The Tigers got the ball first and tried to get a touchdown but couldn’t convert so they settled for a field goal bringing the score 34-31, Tigers lead. Then it was the Aggies turn and they just needed to score a touchdown to shut the game down and walk away with the victory. However they were also not able to put seven points on the board so they just went for three, tying the score at 34-34.

Time for the second overtime, the Aggies were up first and then followed by the Tigers. Four plays and 25 yards later, Mond ran to end-zone, giving the Aggies a 41-34 lead. Here come the Tigers, six plays later, Joe Burrow, the LSU QB, was also able to make it into the end-zone, leveling the score to 41-41.

Fourth overtime: Both teams were not able to make it into the end-zone, but the Tigers and the Aggies added three points to each of their scores after successfully kicking a field goal. The new score came to be 52-52 and both teams were headed to yet another overtime.

Fifth overtime: LSU received the ball first and scored six points, thanks to an eleven yard touchdown pass . The Aggies matched the score of the Tigers, by also scoring a touchdown. Between the Aggies and the Tigers, neither team could complete the two point conversion so onto the sixth they went.

Sixth overtime: 58-58, tie game. A&M had the advantage because they had the ball first, and Mond easily threw up a 25 yard touchdown pass to Tight End, Jace Sternberger. The Aggie touchdown was followed by a successful two point conversion from the hand of Mond to Rogers. Five plays later and the Tigers had tied up the game, once again.

Seventh overtime: Both teams were exhausted but both teams knew that they needed walk away with the win. LSU started off the period with a touchdown, but failed to convert the extra two points. Now, the Aggies were feeling it, it was time to put this game away. Mond was able to find Wide Receiver, Quartney Davis in the end-zone for a touchdown. Then came the two points, make it and win or don’t make it and you’re onto another overtime. Well the Aggies were done with the silly games and they successfully converted the two points. Game over. Aggies win. 74-72. Texas A&M had finally defeated LSU after 23 years.

This game will go down in history for many reasons. First, this was the first time that the Aggies have pulled off a victory over the Tigers, since joining the SEC. Second, this game tied for the most overtimes that have ever been played in a college football game. Lastly, and most importantly, this game became the highest scoring game in CFB history, with 146 total points scored, 91 of those points scored in overtime.

The Aggies needed a sensational win, and they had finally got one after defeating the seventh ranked team in extraordinary fashion.