Moving to the Big Leagues 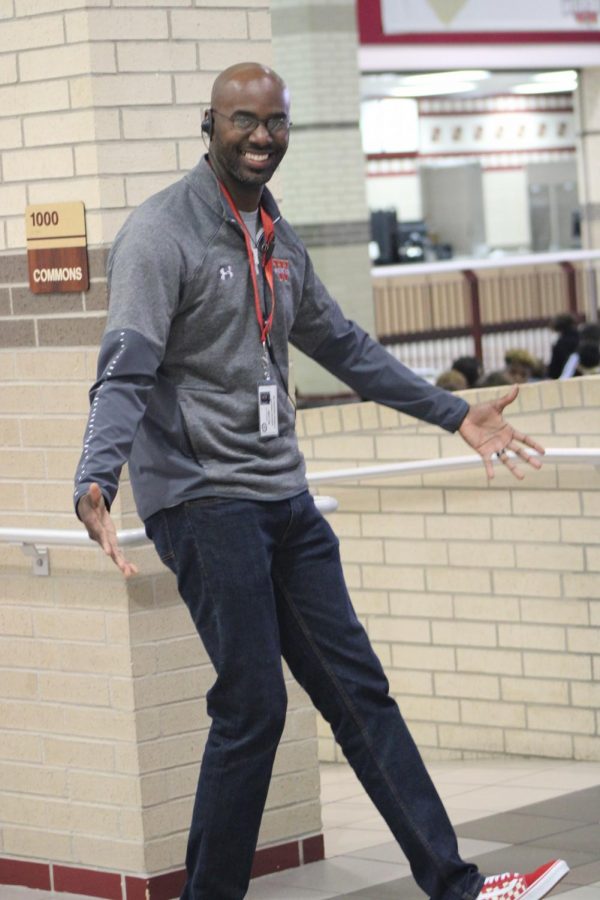 Assistant principal Dwight Williams hangs out in the Commons.

Lots of students at Cy Woods know who Dwight Williams is. They know he is incredibly tall, funny and just a couple of years ago he was a coach at Spillane middle school. However, how Williams adapted from being a coach to an assistant principal may come as more of a surprise.

Before Williams was an assistant principal, he was the head seventh grade football coach and head eighth grade basketball coach at Spillane middle school.

“After graduating from college, becoming a coach was one of the ways I could share a bit of the knowledge I gained over the years as well as still get to be around the game of basketball.” Williams said.

Following 13 years of middle school coaching, Williams decided it was time for him to hang up the cap and whistle, and become an assistant principal.

“I knew that I wanted to grow professionally and continue to support students and teachers to the best of my abilities, and that is what made me want to become an assistant principal,” Williams said.

Even though it was a significant decision for Williams to transition from a coach to an assistant principal, it was not easy leaving Spillane.

“I had the privilege of being on the inaugural staff at Spillane Middle School in 2005, and it was difficult leaving the people I’ve worked with for so long and built lifelong friendships with,” Williams said.

Although it may seem that coaching is completely different than being an assistant principal, they have a lot of similar characteristics.

Williams loved his old job, being able to be around sports, but he loves being an assistant principal even more.

“I surprisingly do not miss coaching. I only miss being able to wear shorts and a T-shirt to work everyday.” Williams said.

One of the most interesting parts about working at Woods, is Williams is able to see some of the same students which he mentored back at Spillane.

“Getting to see my former athletes through the eyes of an assistant principal is just as cool as if I were still their coach. My expectations for their success, whether it be on the playing field or the classroom, has not changed since their middle school days.” Williams said.

For the last 15 years he has worked in Cypress Fairbanks Independent School District, but even though he has been in this district for a while, he still struggled to get used to the size of Cy Woods.

“There are times when I feel I’m not making an impact on students and teachers simply because of how large of a campus Cypress Woods is,” Williams said.

“Being an assistant principal as opposed to coaching has granted me more time with my  family. I now get to enjoy the simple things that I did not get the opportunity to do as a coach such as taking my daughters to school as well as picking them up from school,” Williams said.

Even though Williams has a lot of responsibilities, including: freshman class sponsor, VIPS Liaison, Campus Performance Objective Council, Study Hall and D-Hall, the ability to help outweighs everything else.

“The best part about this job is the opportunity I’m given every day to assist and support every member of the Wildcat family in growing themselves  to be the best individual they can be.” Williams said.