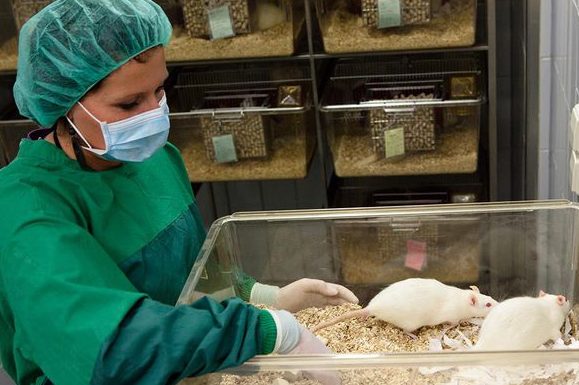 Lab rats being tested on in the LD50 test.

Imagine this: You are locked in a cold, metal cage all day, and when you finally get out, you go through many painful tests and experiments. You don’t have a voice to speak your opinions or rights. Humans get to decide your fate and you don’t get any freedom. This mistreatment should be stopped because it violates the rights of animals.

Every day millions of animals have to undergo tests and experiments for the benefit of humans. They are being tested on for the experimentation of  new household products, cosmetics and drugs. This cruel testing is happening across the globe. The torment of these animals is not worth the human advantage. Therefore, animals should not be used in research or to test the safety of products.

One of the most common tests on animals is called the LD50 test. To perform this test, the researchers hook rabbits, mice, birds and fish up to tubes that pump large amounts of the test product into their stomachs until they die.  This test is extremely painful for the animals and death can take up to days or even weeks. The animals suffer from “vomiting, diarrhea, paralysis and internal bleeding” Tom Regan, a professor at North Carolina University, said. Other common tests include: burning, poisoning, starving, blinding, electrocuting, drowning and even dissecting animals. It is hard to imagine these cruel acts actually happening, but every day more animals are subjects to these horrifying experiments.

The Animal Welfare Act is a federal law that protects animals by regulating the tests and treatments they endure. In reality, the law only covers 5% of animals being tested in labs; according to the Animal Legal Defense Fund. This means that 95% of animals are tested on without painkillers.

Not only do animals have to suffer the pain of experiments and tests, they have to constantly live in a lab. They spend their lives locked in cages, unable to make choices or express natural behaviors. Most of the animals never experience fresh air or sunshine, only bars and concrete.

In 2009, an undercover lab investigation revealed monkeys frantically spinning around and around in their cages, biting open wounds, mutilating themselves, and ripping out their own hair, all because of the distress they must endure.

Animals and people are alike in many ways: they both feel, think, behave and experience pain. Therefore, animals should be treated with the same respect as humans.

Animal testing is not only cruel but it can be very unreliable. A recent study by Cruelty-Free international stated that 95% of drugs fail in human trials, despite successful animal tests. Most treatments showings success in animals rarely works in humans. Less than 2% of diseases in humans appear in animals, according to People for the Ethical Treatment of Animals. It is not fair to test on subjects that don’t even carry the disease you are trying to find the cure to.

The government spends as much as $14.5 billion per year on animal experimentation to try to find new products. These funds could go toward more important causes such as ending world hunger or helping developing countries, instead of wasting it on faulty tests and painful experiments.

At the end of the day animal testing is just wrong. PETA estimated that around 100 million animals are used in laboratories today. The use of animals in experiments has increased by 73% in the past 15 years stated PETA. Animals should be treated with respect and dignity. After all, humans are animals too.