Shameful Representation of Our Country’s Heroes 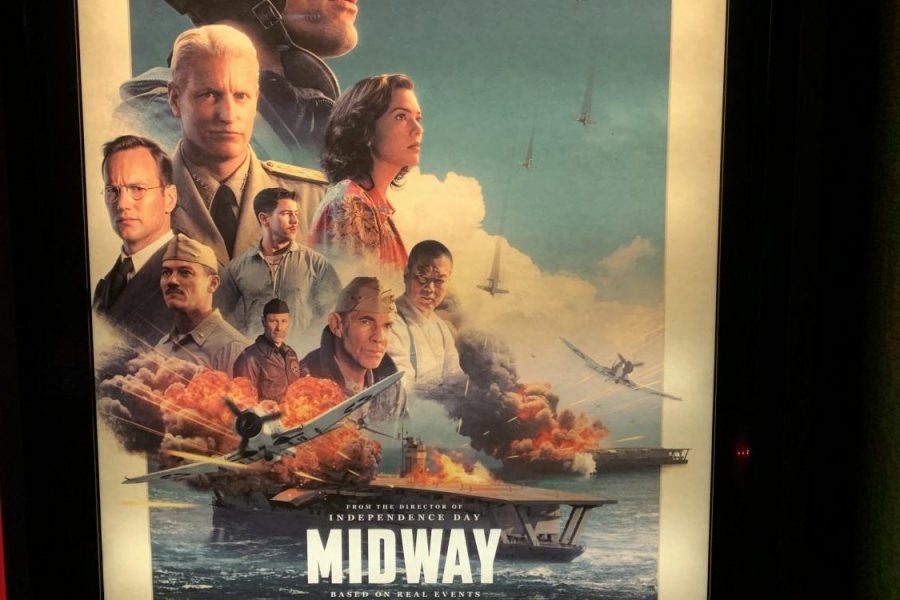 Poster for the movie "Midway," in theaters everywhere.

For a war movie coming out on the weekend of Veterans Day, a day reserved for paying respect to the brave men and women who fought and died for our freedom, it’s not too much to ask for the movie to have that same respect, right?

Midway, directed by Roland Emmerich, stars a massive cast that would take up a large portion of this review to list in its’ entirety. This film tells the real life story of the Battle of Midway, a decisive victory for the Allies in the Pacific Theater of World War II, and the brave men who fought to stop the Japanese from potentially being able to attack the West Coast.

Emmerich is mostly known for directing Independence Day, which, in my opinion, is one of the most entertaining action movies ever made. However, when a career is filled with a large number of flops, such as Godzilla, The Day After Tomorrow and 2012, any success that the filmmaker might have previously had is buried. That being said, I was pretty excited for this movie. I have a soft spot for historical movies, especially anything about World War II, and with an ensemble of performers that have all proven themselves as well rounded actors, Midway had a lot of potential. It “had” potential.

This is easily one of the worst movies of the year. The film drowns in unconvincing CGI, which has been compared unfavorably to a VFX reel for a video game. I can’t agree more. Nothing about this movie looks real in the slightest, and that takes away whatever tension Emmerich tried to create. The biggest problem with using CGI is that if a movie uses too much of it, the audience can become aware that they’re watching events that didn’t actually happen, and Midway doesn’t even try to avoid falling into that trap.

Another problem is the characterization. Every actor in this film is playing someone who actually lived and served in the Second World War. However, almost every character is completely one dimensional, and those who are lucky enough to receive any characterization at all are given the minimal amount.

The acting is serviceable, with Patrick Wilson and Aaron Eckhart giving really good performances, but the problem is that they don’t have anything to work with. Aside from the two actors mentioned above, every other character is completely unlikable. They’re either cocky to the point of narcissism, or scared out of their minds. It’s impossible to care for a main character if we aren’t given any reason to do so. Midway utterly fails on this count.

However, the film’s biggest issue is its depiction of the Japanese military. When a film’s main characters, who are people that the audience is supposed to care about, are on one side, how is it possible that the antagonists are given more effort in terms of characterization? The film makes a strange choice of being sympathetic towards the Japanese military, which may be one of the worst decisions I’ve seen in all of 2019. In my opinion, a military that was known for brutally torturing and killing prisoners should receive no sympathy. Others might feel differently, but as a patriot, I don’t understand the decision of giving the Japanese admirals more sympathy than the main characters of the film.

The very best that I can say about Midway is that action movie fans will be conscious throughout the 138-minute run time. Audience members who just want to see CGI and explosions will be entertained, judging from the round of applause that the film received at my screening. But, for history buffs and serious film goers looking for engaging characters, an interesting story and some form of effort put into the overall film making process, you’re going to leave incredibly disappointed.