Review of "Junie B. Jones Jr. the Musical" 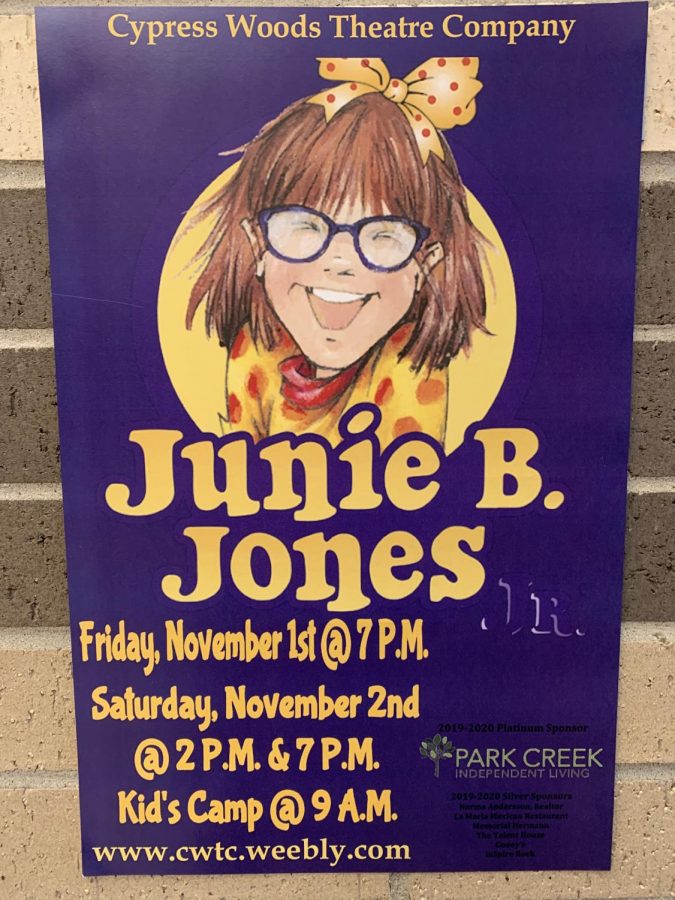 One of the many Junie B. Jones Jr. posters around the school.

Due to the success of You Can’t Take It With You, I can say with all honesty that I walked into Junie B. Jones Jr. the Musical with a small feeling of excitement. That’s right, I was excited for a musical about Junie B. Jones. I honestly thought that I would never write those words.

Junie B. Jones Jr. The Musical, written by Marcy Heisler and Zina Goldrich, is based off the bestselling book series of the same name. This musical tells the story of Junie B. Jones, played by junior Charlotte Smith, as she attempts to navigate her way through a seemingly disastrous year of first grade, filled with backstabbing best friends as well as an intense kickball tournament, and its’ nerve wracking halftime show.

For those who don’t know, I should probably admit that I’m not the biggest fan of musicals. If musicals are done right, with reverence for the original source material or previous versions of the show are on display, I can enjoy myself. However, this seems to have become a rarity these days. That’s not the case here, though. Junie B. Jones Jr. was an absolute blast, filled to the brim with entertaining musical numbers, great choreography and a sense of wonder and exploration that succeeds in bringing out the kid in all of us.

So much of this is due to Smith, who succeeds in being the perfect Junie B. Jones. She’s exactly as the books described their titular character, and the friendship that grows between Junie and Herb, played excellently by sophomore Harley Gibson, was incredibly sweet in a childlike, innocent way.

As stated before, the musical numbers and choreography are top notch. All of the performers give it their all, and their voices aren’t half bad. My favorite song has to be “Writing Down The Story Of My Life,” which may or may not have given me chills. But, the best thing about the musical is its’ overall tone. The production constantly has a carefree feel to it, just like how a random child would act. Before it even began, the cast members were running around the auditorium, completely in character, talking about their problems to little kids and asking adults if they wanted to see their drawings. This was absolutely hilarious to watch, and the tone of unapologetic fun carried on throughout the entire performance. This colorful, vibrant production is going to inspire lots of kids to pursue an avenue in Theatre.

However, Junie B. Jones Jr. isn’t perfect. Its’ one flaw is just how many songs there are. Junie B. Jones Jr. is a very short production, clocking in at around an hour long, and at least three fourths of it are songs. To the kids, who were clearly the target audience, this wasn’t a problem for them. But, I found that there wasn’t much time to slow down and take a breath in between each number. However, for its target audience, this wasn’t a problem in the slightest.

Despite the production’s one flaw, and the occasional microphone problems, I enjoyed myself with Junie B. Jones Jr. It has all of the things that should be expected from a Cy Woods production: great production design, wonderful musical numbers, a great performance from Charlotte Smith and a lot of heart, which just might be its’ biggest strength.